Creating Theater in the Age of Covid-19

Is it possible to create theater during a pandemic? Yes.
Recently, my husband and I were having drinks with friends in New York. That is, we were in Los Angeles, our friends were in New York, and the four of us were on a Zoom meeting enjoying beverages and conversation. Lately, this is our new reality.
We caught up with each other's lives as we discussed life during lockdown in our perspective cities. I mentioned I was in rehearsal for a play. My statement paused the conversation.
"A play? Now? How's that possible?"
I understood. Theaters across the United States, the UK, and around the world have closed until 2021. Many theaters have closed their doors permanently. The idea of rehearsing a play sounded absurd.
My journey to creating theater during the Covid 19 pandemic began like many other acting gigs, with a casting notice on an actor's casting platform.
Casting "Fort Huachuca." Synopsis: Set during World War II in segregated America, five African American women enlist in the army to train as nurses. They are sent to an army base camp in Arizona where they are set to encounter the biggest challenges of their lives.
This  period has always fascinated me. My father and uncle were both veterans of WWII where they served in the segregated army. My father served in the European Theater. My uncle served in Europe and Asia; he was part of the "colored" unit that participated in the liberation of the Buchenwald concentration camp. He did not talk about his experiences at Buchenwald until the 1990's.
And now, something new had been presented to me; there were Black women serving as nurses in WWII. The thought never occurred to me. I did a little research. When the war ended in September 1945 just 479 black nurses were serving in a corps of 50,000. A quota system imposed by the segregated Army during the last two years of the war held down the number of black enrollments. I found photos and newsreel footage of Black women in uniform which inspired me. 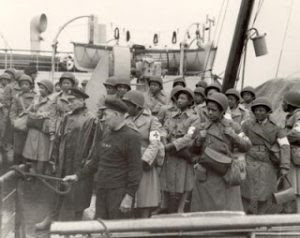 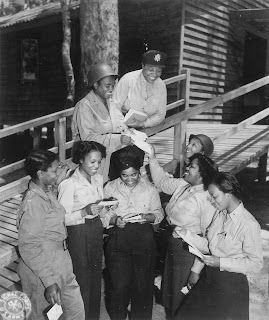 The next day I shot a self-tape (an audition shot at home.) This has become common practice for actors in these last few years. During the Covid 19 crisis, most auditions are conducted this way. A few weeks later, I was offered the role of Lt. Susan E. Freeman in Fort Huachuca. The play is one of the offerings in this year's SheLA Summer Theater Festival, the premiere festival for new, original, creative works by women playwrights and composers in Los Angeles.
The actor's agreement was standard, save for one phrase: It will be 100% digital.
At first, I had a hard time wrapping my mind around the concept, imagining the play being performed in a theater and recorded for viewing. I soon learned 100% digital meant that I would be rehearsing and performing from my home. For me, this meant my dining room.
At first, my preparation was no different than it would be for any other theatrical production. I began memorizing and studying the period, which included researching the segregated army.
For the first time I was portraying a real person. Lt. Susan E. Freeman was the chief nurse at Ft. Huachuca. She commanded the first unit of Black nurses to serve overseas at the 25th Station Hospital in Liberia. She would be the first Black Army nurse to be promoted to the rank of Captain. I needed to find her connection to the new nurses at the Fort Huachuca.
At our first rehearsal, I realized this was going to be like no other production I'd ever done. Our director, Ani Marderosian, described the production as “a step above a staged reading.” I was working with an amazingly talented cast of actors in three states and two countries. My stage was a 3x5 space against the back wall of my dining room. My proscenium was the width of my laptop screen. We met via Zoom.

For me, the most challenging aspects of the production were technical. At the first rehearsal, and despite the fact I'd done several Zoom meetings with no issues, my microphone was not working. I was able to fix the issue, but at subsequent rehearsals had a backup laptop and my cell phone nearby just in case. I had to remind myself to look at the lens of the camera to connect with my fellow castmates and the audience. I ran Zoom meetings with myself to get comfortable with entrances, exits while operating my camera and microphone. I spiked my laptop, lights, and dining room table with gaffer's tape for consistency. Wardrobe was simplified to what was in our closets. No special makeup  was needed, though I replicated a period hairstyle.
During our recording process, I had the same pre performance butterflies I experience before any production. Now that our final taping is over, I'm experiencing bittersweet satisfaction I feel after the completion of any other play.

Is it possible to create theater during a pandemic? My answer is a resounding yes! I am grateful to have had this experience.
It is essential that we continue to tell our stories. I remember the industry after the Commercial Strike in 2000. Things changed. The next year there was another large change in the industry after the events of 9/11. As a result of Covid 19, we, as artists, are seeing our venues close and opportunities dwindle. Many have lost livelihoods. Tragically many have lost friends and loved ones to the virus.
Now more than ever it is vital that the artistic community remain supportive, positive, and yes, creative. 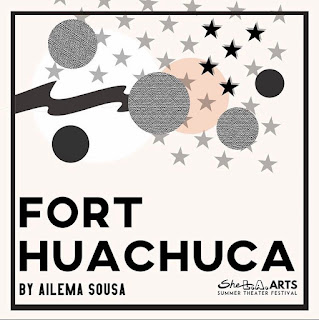 SheLA is the premiere spot for new, original, creative works by women playwrights and composers in LA. This summer, we're going digital!
SATURDAY, JULY 18, 2PMPT
FORT HUACHUCA
by Ailema Sousa
Directed by Ani Marderosian
World War II. Arizona. African American nurses arrive on an army base camp for the biggest challenge of their lives: inequality, growing racial tension and a society that does not acknowledge their efforts, when all they want is to fight for their country.
Cast: Naima Herbrail Kidjo, Brittney McClendon, Brittany Shonka, Nicole Sousa, Casterline Villar, Donna Allen, Camille Mallet de Chauny, and Gilbert Roy.
Tickets are available at:
https://www.eventbrite.com/e/the-2020-shela-summer-theater-festival-tickets-107447055034
Posted by Donna Allen at 9:51 PM