The View From My Neighborhood, Hollywood: A Resident's Eyeview of the Oscars

At first everything looks normal as people are going about their Saturdays. The weather is beautiful and it's a good day to run errands, work out, or simply relax at a neighborhood eatery, coffee shop or bar. At this point all you notice are the signs warning you that there will be limited parking on Sunday. Those who ignore the signs will be towed. 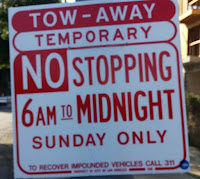 As I look at one of these signs, a man walking his dog comments. "They towed me last year. It wasn't fun." Surprisingly, the man is not bitter. In fact, he's rather cheerful.

It's Oscar time in Hollywood.

Preparations for tomorrow's ceremony have been going on for
weeks, but the residents of Hollywood began to feel the effects of the upcoming broadcast in last week or so. For most of us who are aware, we simply read the signs and avoid certain area s for  few weeks while our lives pretty much continue as usual. Those who are unaware find street closures.

Things have come a long way from the first modern day Oscar's in Hollywood back in 2002; the first post 9/11 Oscar's when the security was at an all time high. The blocks surrounding the Kodak Theater were closed to the public. Residents living in the area had to show photo IDs to get into the area and to their homes. At the time, I was living just outside of the barricaded area, but still had to deal with two weeks of congested traffic. Over the last few weeks I have noticed an increased police presence, but nothing more than that, at least not yet.

While I vow to stay away from the preparations of Hollywood's most glamorous night of the year, I find myself drawn to the area before the ceremony. This area where tourists normally flock to see the Chinese Theater, The Hollywood Walk of Fame and iconic Hollywood Sign are now witness to an international media event.

Today, I took a walk to see my neighborhood getting ready for it's big night. Today will be the last day that the public will be allowed in the vicinity of the Dolby Theater until after tomorrow's ceremony.
﻿﻿﻿

The area is
crowded with visitors who are in awe of the amount of press (local, national and international)  already broadcasting. There are rehearsals in progress as stand-ins for the stars walk the red carpet. I see several entertainment reporters (almost unrecognizable without hair, makeup and wardrobe) reviewing notes and acquainting themselves with the new technology that they'll be using during the broadcast. 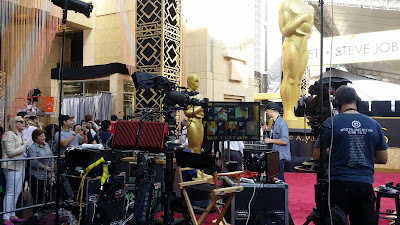 The staircase just outside the Dolby Theater  newly covered in a red carpet, looks regal. I try to imagine climbing those stairs wearing 4 1/2"heels.

It's hard to maneuver the sidewalk due to so many people in so little space, but I do hear pieces of conversations:

I'd give anything if I could  just stand on the red carpet...for just a moment!

Just think...tomorrow George Clooney and Leonardo  DiCaprio will be here breathing the same air we are. The same air!

You mean they rehearse for the red carpet?

Are there any stars here now?

I thought the Oscar's were tomorrow.
﻿
Mom, this is stupid. Can we go to Disneyland? I mean, who's this Oscar guy anyway?

It's all so glamorous and exciting! I don't believe I'm really here! Take my picture so I'll have proof that I walked in the same footsteps as the stars!

I find myself trying to see the events in front of me through the eyes of the visitors and feel some of their excitement.  They're genuinely excited to be here. I forget that for many, this is a once in a lifetime experience. Los Angeles relies heavily on the motion picture industry (Hollywood) and tourism to support the economy. By enjoying Oscar preparations, I suppose many visitors are supporting both.

Tomorrow, my husband and I will observe our Oscar Day tradition. We'll go to work, order carryout and take an alternate route into Hollywood to avoid Oscar traffic. We'll be ready to present photo ID's (if necessary) to provide proof of residency. The goal is to be home by the start of the broadcast. I'll say that I'm not really interested this year and try to do other things around the house. Invariably, I'll end up watching most of the show.

And then, probably by Wednesday or Thursday, it will be as if the Oscar's never happened. Streets will be open, parking restrictions will have been lifted and people will return to their routines.
Most will forget who won this or that award, and who wore who on the red carpet as Hollywood returns to normal.

But then we're talking about my neighborhood, Hollywood where normal will mean different things to different people. But for a few hours tomorrow night, Hollywood's normal will be gold. 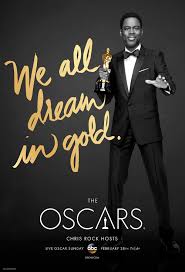