A few thoughts on David Bowie 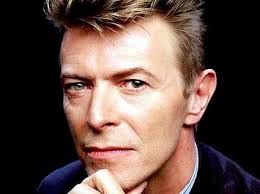 It's been less than twenty-four hours since I learned of the death of David Bowie. I learned of this last night as I was checking email for the last time before going to sleep. The post, via Deadline Hollywood, had appeared in my inbox less than a minute before: David Bowie Dies: Rock & Cultural Icon Was 69.

Like so many others, I was shocked and for a few moments couldn't speak.  I quickly showed the headline to my husband who asked, "Is this appearing anywhere else?"

That's when multiple posts from many other sources started to appear. I went to sleep sad in the knowledge that this world had lost another phenomenal talent.

But when I awoke this morning, I was still feeling profound sadness-and for the life of me couldn't explain why. I was never a huge fan of David Bowie and had never purchased any of his music, but his passing had affected me.

I first heard David Bowie's music on AM radio as a kid growing up in the Midwest. I remember thinking that his voice had a unique quality while his  melodies stood apart from the majority of the sound alike pop music of the seventies. His sound was different than anything I'd ever heard.

He came to my hometown of Cincinnati, Ohio to perform in concert. I was much too young to attend, but heard about this concert through a family friend, Geri Sowell.

Geri was different than any of my parents friends. She was an artist and very active in the cultural scene. She seemed to be at every gallery opening, and attended live performances of just about anything coming into town. While my parents would never attend a huge concert, hating crowds and dismissing the music as noise, Geri had attended the David Bowie concert and told us about it the next morning over brunch. I can sill see her siting in our solarium in a long gauzy Indian dress, huge turquoise earrings and sporting a new shag haircut. She'd experienced something incredible.

"The venue was packed! There were tons of lights around the arena and over the stage, so I knew we were in for something big. The house lights went down, the music started low and got louder before the lights came on full and Bowie took the stage. I thought there was going to be a riot! People started yelling and booing-and this joker next to me is yelling that he wants his money back."

She went on to explain that many of the concert goers knew David Bowie's music, but not his race. Many in the integrated audience learned that the David Bowie, was white.

She continued. "But things calmed down pretty quickly. This man's music transcends race, and by the third or fourth song everyone was into it. I've never seen anything like it!  He put on a great show, but this was so much more than a concert. This was an experience that I'll never forget!"

Geri Sowell's story made an impression on me. I'd never thought of David Bowie's music in terms of black and white, simply because in my young mind I'd always thought music was colorless. I'd certainly never thought music could have power; in this case the power to win over a difficult audience.

Over the years I followed David Bowie's career and was continually amazed as he reinvented himself. I enjoyed seeing the transformations that were more than just costume and makeup changes- he evolved from the inside. He was much more than a singer or actor; this man was a true artist.  He dared to be different, which, in a way told me that conforming to the norm was merely an option in a world full of options.

When I was studying acting in New York City, I went out with a group of friends and fellow acting students. We eventually found ourselves in a Greenwich Village club that had a dance floor. I heard the first few notes of a favorite  David Bowie song blare over the speakers and heard myself say, "I love this song!"

That's when one friend, (a guy I was majorly crushing on), grabbed my hand and pulled me onto the floor. "Then c'mon!"

For whatever reason, while dancing that night, my life suddenly made sense. I was genuinely happy. I was in New York City, studying acting and in essence, beginning my career. I was with a group of very good friends and dancing with an incredible guy. My future was ahead of me and filled with endless possibilities. It was a rare perfect moment. That night, Let's Dance became my personal anthem for embracing life. To this day I can't hear that song without vividly remembering that night and smiling.

I suppose it's simply a part of life. As we grow older, more and more people who've always been in our lives pass on. Sometimes, it's hard say goodbye. David Bowie's passing was unexpected. Through his artistic talents, he touched countless lives.  He became part of the soundtrack of my life when I was very young...and am so grateful. 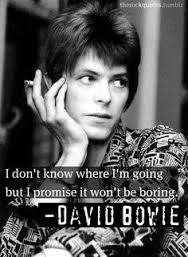 Much love to Iman and his family.

Funny, I can't seem to get that song out of my head.

Let's dance,
Put on your red shoes and dance the blues
Let's dance,
To the song they're playin' on the radio
Let's sway,
While color lights up your face
Let's sway,
Sway through the crowd to an empty space...