I just naturally assumed that my first post of the year would be filled with enthusiastic words about the year ahead. That was until the other morning. I sat in the terminal of the Greater Cincinnati/Northern Kentucky Airport awaiting my (two-hour delayed) flight back home to Los Angeles. To pass time, I scrolled through my Facebook feed. 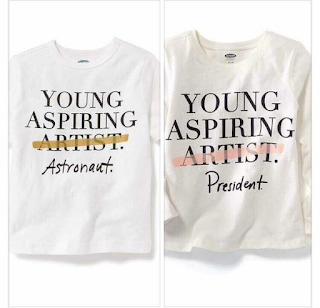 A friend had shared a photo of a child's tee shirt from a major retailer, featuring what I felt was a negative message. I'm sure many of you are familiar with this story. After reading several (mostly negative) comments about the shirt, I decided that I would not share or comment. This had  been done sufficiently by many others. My feeling was that  by the time my flight arrived in Los Angeles, the shirt would have already been pulled from store shelves and removed from the online site. In reality, this occurred before my flight departed the Midwest. The next day I read the retailer's apology.

But here it is a few days later in a brand new year-and I'm still thinking about the shirt's negative connotations about artists.

Unlike defined career paths in traditional professions, there are many ways and paths to follow for those pursuing careers in the artistic and creative worlds. Every artist has a different path and subsequently a unique career. Many artists earn degrees from colleges and universities, while others may go directly into their chosen professions.

I am a working actor living in Los Angeles. I am surrounded by other working artists who are productive members of society. We work to pay our rent, mortgages and bills that are a reality of life in today's world. We have insurance (health/auto/life) and retirement plans. Many of us have families and are taking care of children and or aging parents. Many of us volunteer our time and talents on a regular basis. We pay taxes. We contribute.  Basically, we're doing exactly what others in traditional professions are doing. So why aren't actors, dancers writers or musicians given the same respect as, oh...maybe an astronaut or a president?

I believe that in part,  this attitude stems from the majority of the population not knowing exactly what we as artists do for a living. Young gifted aspiring artists are too often discouraged from pursuing careers in the arts.

The conversations are eerily similar.  An excited young artist reveals that they're interested in pursuing a career in the performing or creative arts. "Mom, dad, I'm going to be a dancer!" (feel free to substitute actor, writer, musician, etc.) 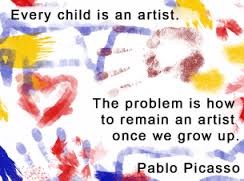 Many parents are horrified as they imagine their child ending up unemployed and homeless. Some parents laugh. "How can you possibly make a living dancing (acting, writing, playing music)? It's alright to dance (act, write, play music, etc.) as a hobby, but you need a real job!" The underlying message is that the young artist will have no family support.

Many people have simply put aside any creative ambitions to please family and others around them. I know a  gifted young writer whose family steered him into law school. This was despite the fact he had won several writing competitions and had been awarded a full scholarship at university with one of the best writing programs in the country. His father was afraid of his son living in the land of make believe, and refused to entertain the idea of his intelligent son working in a creative field.

“The true sign of intelligence is not knowledge but imagination.” ― Albert Einstein

Obviously, the father in this example has no idea what types of jobs a writer may have throughout his career. This is, or has been a problem for many of us.

My own parents couldn't understand my desire to be an actor. I heard them more than once say that they did not want me hanging around those people, (artists and other creative individuals), and persuaded me to pursue broadcast journalism-since this respected field was just like acting. I spent my freshman year at Ohio University in Athens Ohio which  had one of the best broadcast journalism departments in the country.  While there, I worked at one of the campus radio stations, reading and writing newscasts two to three evenings a week.  I did well in my classes and excelled in anything communication oriented. I was miserable. I did however attend every production done by the drama department which reinforced my desire to become an actor. That spring I transferred to the drama department and the next year transferred to Emerson College in Boston as an acting major. I was very lucky in that I was hired by a professional theater company in Chicago immediately after my graduation.

In Chicago I learned one of the realities of being a working actor...it's hard- just like anything else worth pursuing.  After my contract with theater company ended, I had a difficult time finding work. Money was tight and I was extremely depressed. After several weeks, I came home to Ohio feeling defeated, (in part due to a breakup with my first serious boyfriend). That's when my parents made an amazing offer-graduate school! They'd pay in full, but there was a catch. I could study anything other than the performing or creative arts. In their eyes I'd had my little acting adventure. It was time to buckle down and find a real career. In my case, the easy way out would have been to  accept their generous offer and enroll in a graduate program. But instead I chose the more difficult path. That afternoon I was on the first Greyhound bus back to Chicago to follow my true passion. While I was terrified, I also feared looking back years later wondering why I had never pursued the career I truly desired.

What did I do with my acting degree? Over the next three years I did  industrial and educational videos, several television commercials and theater. I supplemented my acting income by singing piano bar in the evenings. In Chicago I learned the business  of the business. Within a year I became eligible and joined  the Screen Actors Guild (SAG). After three years in Chicago I moved to LA where I've continued to work as an actor. The industry continues to change which means I've also had to change by evolving as an artist and performer, just as anyone in any other profession must do to remain relevant. There is no shame involved in working a day job when necessary to make ends meet-just like those outside of the artistic and creative communities. 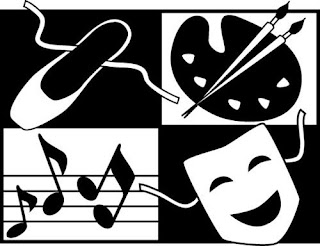 Another problem for artists and others working in creative professions, is that many outside of the industry can't fathom that working artists are actually paid for what they perceive are frivolous activities and not actual jobs. (My father once asked me if I got paid for working on soap operas and in commercials.) Nothing makes me angrier than when artists are asked to work for free. (Unless this is a donation of time and talent for a charity event where everyone involved will be donating their time and services.) An event planner or business owner will usually promise the artist some sort of exposure, which of course is much better than monetary compensation. This is a disrespectful and exploitive practice that deserves it's own blog post.

A few years ago I began to explore another form of creativity, writing. I've been writing for years but had never thought about writing professionally until 2012. In 2015, I published two novels.  Fall Again is a romantic series set in the world of working actors and other artists. While I've always loved the romance genre, I wanted to provide a glimpse into a world that is often misunderstood and maligned by the general public. My characters are hard working, talented and grounded. Too many times I've read novels that portray actors (musicians, dancers, writers) as lazy or dysfunctional undesirables.  Many will find redemption-only after leaving the industry-that is if they don't end up dead beforehand. In Fall Again, I wanted to present a realistic portrayal of working artists. www.fallagainseries.com

The target audience for the Fall Again series is women, so imagine my surprise when I realized that several men, mostly from the creative world were reading my books. They could easily  relate to my narrative.  One man commented, "I've lived this! I've built a good solid acting career but my family practically disowned me for becoming an actor ." 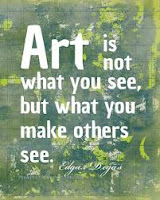 One of the best responses to the (anti) artist tee shirt was this tee shirt. 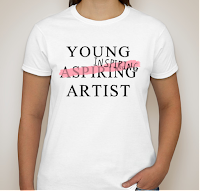 
There has been an improvement on the Arts in Education front as was recently reported by NPR:
School Arts Advocates Cheer New Education Measure http://www.npr.org/2015/12/16/459936069/arts-education-advocates-cheer-new-education-measure
It looks like the arts will once again be included as part of a well-rounded education. Working artists have known this for centuries.

It's a New Year. I resolve to remain creative, artistic and ever hopeful that one day my family will understand what I do for a living.

I'll leave you with the words of sociologist Charles Horton Cooley. 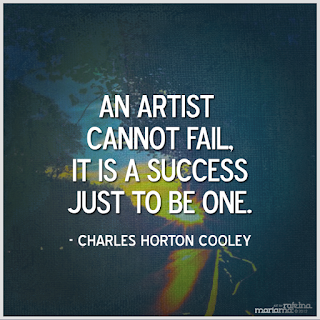